It’s been a hectic couple of weeks. I’m currently in rehearsals for a production of Hair I’m musical directing at Wagner College on Staten Island. I lamented to Laura that I hadn’t written a blog in several weeks and didn’t know what I could even write about. She said, “You should write about your experience working on Hair.”

In case you don’t know this about Laura, she always says the right thing.

But why talk about Hair, a show written 50 years ago? What could it possibly have in common with contemporary musical theatre?

While studying the show, I’ve been in awe of its scope, both given its always-topical political and social messages and the breadth of its musical styles. What I had ignorantly dismissed as a hippie dippie hodgepodge musical with no real plot has educated me on how groundbreaking and truly relevant the show still is.

Would it be blasphemy to call Hair the Hamilton of its day? I don’t think so. It’s easy to forget how revolutionary the show was only twenty-some years after the musical comedy had been codified as a legitimate genre.

First off, it utilizes more musical styles in its storytelling than any other musical I know. Among the genres represented are: Pop (“Easy to be Hard”), Rock (“Hair”), Country (“Don’t Put it Down”), Funk (“Colored Spade”), Vaudeville (“Abie Baby”), Doo-Wop (“Four Score”) Pastiche (“My Conviction”), Jazz (“Minuet”), Classical (“The War”), etc…

This, of course, means that the vocal demands on the singers are greater and require an astute understanding of technique versus style. This is a very contemporary issue, which we’ve discussed at length in this blog.

And these disparate musical styles don’t lead the audience in linear way. Rather than honoring the traditional book musical form, the writers created a cumulative, atmospheric effect with a series of songs and vignettes, many of which feature a heightened theatricality. This makes the show a black sheep when compared with the other Broadway shows of the 1968 season, including: George M!, Hello Dolly, Promises, Promises, West Side Story, and Zorba.

It’s also fascinating to see the lineage of musical inspiration. To me, it seems obvious that Jonathan Larson at least had “Ain’t Got No Grass” at the back of his mind when writing Rent’s “La Vie Boheme.” Listen to them both and revel in their similarities.

In short, Hair breaks a lot of rules and, in my opinion, creates a visceral impact that also acts as a call to action. This is not entertainment for entertainment’s sake. It is meant to stir the audience up, lift a mirror to society and, especially today, say “How much have we actually changed?” What could be more contemporary?

I took this show because, besides having a great affection for the students and faculty at Wagner, the show scared the living daylights out of me. First off, there are just shy of fifty musical numbers. It’s almost relentless if it weren’t so darn tuneful. I had the acquire many new skills (including programming my own patches on MainStage) and make sure everyone could sing in the many different vocal styles the show demands. But the more I work on the show, the more I feel totally at home. For me, Hair is a musical that has retained its status as a contemporary musical, even 50 years later. 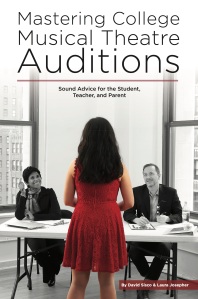 Check out our book “Mastering College Musical Theatre Auditions: Sound Advice for the Student, Teacher, and Parent”, available on Amazon.

Visit www.contemporarymusicaltheatre.com for more information on over 180 contemporary musical theatre writers and 550+ songs, all searchable by voice and song type.

This site uses Akismet to reduce spam. Learn how your comment data is processed.